Book Talk: Everything Under by Daisy Johnson | A Strange Speculative Fiction Book

July 19, 2019
Let's talk about Everything Under by Daisy Johnson! 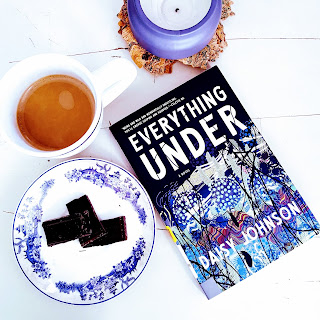 Have you ever read a book that did not make sense? The writing was just so ethereal that you couldn't put two and two together about who was who or what was happening? That was my experience with Everything Under. I recently watched a video by Books and Things on YouTube, which I will link here, where Katie talked about two books she had read that were written, in my opinion, in a similar fashion to Everything Under. She was nice enough to say it was pleasant reading them, but it cracked me up how she "struggled to find a focus" and couldn't find it! The two books she mentioned were Spring Garden by Tomoka Shibasaki and Warlight by Michael Ondaatje, in case you're interested 😊. If you'd like to hear her reviews of these two books, begin at timestamp 12:00. I find her explanations so succinct. That she admits to "not getting" these two books is refreshing to me and gives me a big tickle.

Well, that's how I feel about Everything Under. It was written in the pattern of some myth I never heard of, so maybe that's what I was missing. 😂

I checked the ratings on some popular websites and here's what I found. My opinion doesn't seem to be the consensus, but I did find other reviews that shared my confusion.

Before I tell you my personal rating, I'm going to bend your ear with what I thought of the story. So here's what I liked and didn't like about the book.

Likes:
The cover was matte and smooth with a silky texture; I loved it. The tactile feel was very pleasing. The colorful design and the one-liner reviews captivated me, and I thought I was in for the read of my life!

Well, that's about it for the likes!

Dislikes:
Oh where do I begin?!
The story was quite predictable for me. I was able to guess the secrets long before they were revealed.

The main character is a girl who does not realize she is adopted. A neighbor prophesies she will kill her father and have sex with her mother. The specifics of the prophecy are not revealed until later; however, I just thought of the worst thing she could do with her parents and was not surprised when I learned the prophecy. The main character runs away from her adoptive parents in an effort to prevent the prophecy from coming true. She didn't realize she would have been safe from the prophecy there since they are not her real parents. She meets a man on a houseboat and lives with him for a while. When she accidentally kills him, it's not hard to figure out the guy must be her dad somehow. Later, the girl disguises herself as a boy, runs into a woman who falls in love with her and sleeps with her. Well, duh, that woman will turn out to be her mom. And that is exactly what happens.

The story and characters were difficult to piece together. The first half of the book I spent wondering who was who. The chapters skipped from one perspective to the next without being clearly labeled. The purpose was to create an atmosphere of dreamlike mystery. For me, it was an atmosphere of confusion. I was unimpressed and even a little angry. This was supposed to be such a good book; the cover promised me! (😂)

Many readers are not dedicated enough to wade through half the book without knowing what is happening to who. Give us a few more hints, Daisy!

Second person point of view is a no! for me. I cannot stand second person point of view. Forgive me if I ever write a story in it. I have not liked it since I read a "Choose Your Own Adventure" book. You know, those books that go like this: "You walk into the room and see a bloody knife. What do you do? A.) Yell for help. turn to p.16 B.) Leave the room without doing anything. turn to p.17 C.) Pick up the knife and wave it around, pretending to be the killer. turn to p.21"

I just do not like being "talked at" in a book. I want to observe, to watch what's going on, to have that layer of magic between me and the story that I live for when I read. "You" makes the story too present, too much like reality: dull and boring.

In Everything Under, though, the narrator is talking "at" me, she is never talking to me but always to some unknown person. Which is even more frustrating! Why don't you go tell the person you're talking to about your issues instead of letting me in on your internal conversation as if I can do something about it?! Get up and take action, woman! That's why I'm reading your story. I want to see what you do, what choices you make. I don't want to watch you just sit there and think for half the book.

Daisy described the people and settings with details that were gross. I like a book that sounds real, descriptions that are gritty. But there is a type of gritty that is just gross to me. I don't want to picture and smell the matted armpit hair of a girl who has not showered for three months. I don't want to see every speck of dirt under her fingernails and in every crack of her skin. For me this kind of description turns dirt into art, and I just don't like that kind of art. It's like a photo of a bomb-shattered city. It's not beautiful to me. It's dirty, it's torn, it's sad. I want a little bit of hope in there, not just pure desolation.

The ending was very unsatisfying for me. The narrator at the beginning of the book is the step sister of the main character. I don't even remember what happens to the main character who defiles her parents. Oh yeah, she drowns while her mother watches her. The step sister is looking for their mother. The mother has dementia and keeps running off. (I guess I would too if I had had sex with one of my daughters then watched her drown.) At the end of the story, the mother is safe with the narrating daughter, until the mother decides to hang herself with her own bed sheets.

So you can see this is a very uplifting story.

If you want to be confused and disappointed, check out Everything Under. For me, this book was a 0 out of 5 stars. The cover was not even enough to give it one star.

Some of my humor may have been lost in all the criticism above, but know that I get a kick out of talking about books I didn't enjoy reading. Please take everything I say with a chuckle.

If all this negative talk has not put you off buying the book, you can check it out below.

Well, if you've read the book, what did you think? Were you confused? Did you love the story? Did you understand it? Did you not understand it but loved that you didn't? Let me know what you think in the comments below. I would love to hear from you. Feel free to mention any other books that left you bewildered and angry.

Remember to check out great, low-priced eBooks on Smashwords.com as well. Currently, they are holding their yearly summer sale. You can buy deeply discounted and even free eBooks. Check out my book Better Butter below. Discount is automatically applied at checkout. (Update 8/1/19: The Smashwords summer sale ended 7/31/19. However, they hold it every year during the month of July. You can still check out a free sample of my book or buy it at $1.99.)


Note: I use some affiliate links.

Popular posts from this blog

October 05, 2018
I'd like to introduce you to our last featured small town shop. Twenty-three-year-old Dana Harn is the daughter of Deborah Harn, the owner of yesterday's featured shop, Vance Street Market Flower Shop. Dana will be opening Southern Roots Florist, Gifts and Event Rentals on Front Street in Warsaw this month.


Like her mother, Dana, too, wanted to run her own business. Because of the help of dear friend and stellar designer, Stacey McNeil, Dana was able to quit her job in Maryland and return to North Carolina to begin work on opening a florist shop.

Creativity:
Though Stacey will be in charge of design at the new location, Dana is also discovering a talent for creating floral and decorative arrangements. Dana finds inspiration from the creativity of others and discovering new things. "It helps me expand my own creativity and develop my style. I end up loving things I would not have otherwise thought of." Dana is drawn to decorative items that lend themselves well to a m…
Post a Comment
Read more

October 02, 2018
Hello, everyone. Welcome back to Book Talk. I'm excited to introduce you to the first of the small town business owners in this week's blog post series: Small Town Businesses.


Tonya Parrish owns Royal Gifts & Fine China, located on the square in Clinton, North Carolina. She learned her passion for business and creativity from her parents who ran a shop on the far side of town for many years as Tonya was growing up. After a brief time of working various jobs, including filing in an office, Tonya decided that she needed an outlet for her creativity and decided to open her first shop, Shabby Lane, in 2013 where she sold refinished furniture and carried some bridal registry items. In 2015, she moved her shop to a different side of the square and renamed it Royal Gifts and Fine China. Tonya discontinued the furniture but expanded her line of china and began focusing heavily on bridal registry. Today she carries 50+ lines of China, Vietri being her personal favorite.